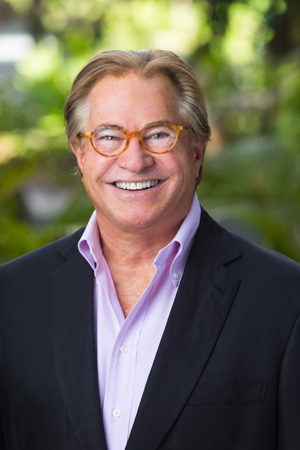 Five thousand miles away from Wall Street in his office in Honolulu, Jay H. Shidler, founder and managing partner of The Shidler Group, oversees his firm’s vast array of commercial real estate and credit-related investments. The company through affiliated operating partnerships and corporations has acquired and managed over 2,000 properties in 40 states and Canada. From his home office in the middle of the Pacific, Jay has founded and been the initial investor in over 20 public and private companies, five of which have been listed on the NYSE.

Jay is a deeply involved, whiteboard-scribbling, numbers-crunching visionary, whose keen instincts date back to his undergraduate years at the University of Hawaiʻi, when a thesis he wrote formed the basis for a successful condominium development. It was also then that he began dispensing real estate advice in a weekly column he penned for Pacific Business News, Hawaiʻi’s premier business publication, which described him as “one of the best-informed young men in his field." He was 22 years old.

After college and upon fulfilling his commitment as a lieutenant in the Army Corps of Engineers, Jay struck out on his own, seeking properties with strong upside potential and whose value he could maximize. To this day, the creation-of-value mantra for Jay Shidler starts with understanding a set of complex, seemingly disparate circumstances and crafting a comprehensive solution that includes committing his own capital in the form of debt and/or equity to every initiative. He is a nationally recognized expert in the field of real estate investment and finance.

A unique specialization of The Shidler Group is its long history in the structuring and financing of leasehold estates on 99-year ground leases and the resulting leased fee estates in the underlying land.

The impact of Jay’s groundbreaking work has been recognized nationally throughout the industry and, as significant to him, much closer to home. As a 1968 alumnus of the University with a bachelor of business administration degree, Jay credits the guidance of his professors and strong connections with classmates with much of his success in the business world. Beginning with a gift of $25 million in cash in 2006 to the University of Hawaiʻi Foundation for the benefit of the College of Business (the largest single gift ever given to the University), the school was renamed the Shidler College of Business in his honor. That gift was followed in 2014 by an additional $69 million, “rounding up” his total donations to $100 million and was comprised of cash and interests in ground leases underlying a number of significant office building in the central business districts (CBD) of mainland cities including Seattle, Denver, and Louisville. Jay’s 2014 commitment, plus an additional $11 million, has been increased in 2017 by an additional $117 million in cash and additional ground leases in the CBDs of Seattle, Denver, Chicago, Tampa, Nashville, Louisville, Mount Vernon, Charlotte, and Columbus making his total gifts of $228 million the second largest gift to any business college at a public university.

Jay and Wallette, his wife of 47 years, have a daughter, Summer, and five grandchildren. He is an active trustee of several charitable organizations including The Shidler Family Foundation.

About The Shidler Group

The Shidler Group also has been the founding investor in five NYSE-listed public corporations, which collectively have issued more than $14.5 billion of debt and equity securities.